It seems every week brings another Top Ten ranking that shows how desirable it is to live in Sonoma – or how expensive. Two sides of the same coin, you might say: real estate agents say it’s simple supply-and-demand. If people want to live here, of course it’s more expensive to do so. It’s a serious enough situation that it formed one of seven topics in the latest Sonoma County Grand Jury report, issued a couple weeks ago on June 29: “Spotlight on Affordable Housing.”

Their summary included the deduction, “Without unrealistic sums of public funds, increasing the supply of affordable housing will be a long-term challenge for Sonoma County.” So where are these affordable homes supposed to come from? Who will build them, and who will buy them? And what does “affordable” mean when, according to too many reports, many people just can’t afford to live here, period? Those were some of the questions on the table at the joint City Council/Planning Commission meeting held in May, which included City Planner David Goodison’s 11-page report on the subject of affordable housing.

“The starting point for discussing Sonoma’s housing needs is the Regional Housing Needs Assessment (RHNA), also known as the ‘fair share’ allocation,” stated Goodison. In the North Bay, that assessment is issued by the Association of Bay Area Governments, or ABAG, composed of jurisdictions in nine Bay Area counties. ABAG’s assessment is itself based on population projections in the decades to come. Based on the most recently issued RHNA, from 2013, the fair share allocation for the City of Sonoma totals 137 affordable housing units to be planned or built between 2015 to 2023, broken down as Very Low (24 units), Low (23), Moderate (27) and Above-Moderate (63) affordability. Just listing those numbers doesn’t mean the City is obligated to build those units, however. “The city’s legal responsibility… is to show that opportunities exist that allow for the units to be built,” said Goodison. “It is not the City’s responsibility to fund and build every unit.” Nonetheless, added Goodison, “it is evident that the housing market will not produce low and very-low income units without substantial incentives, including financial assistance.”

That directly echoes the Grand Jury report, which called for elected officials and county administrators to “focus on those policies that can accelerate construction of all types of housing, and on building consensus for those policies.” What separates those four levels of affordability – and a fifth level, Extremely Low or at risk of homelessness – is simply what percentage of income is available to go toward housing.

Affordable housing levels are determined by the percentage of average median income (AMI) against housing costs – and the somewhat dated idea that a homeowner should pay up to 30 percent of his or her annual income toward house payments. In Sonoma County, the currently accepted AMI for a four-person family for 2015 is $82,600. If your family income is that much, you’re at the median. (Median income for smaller families are $74,350 for a family of three, $66,100 for a couple and $57,800 for a single person.) Ironically, earning the median doesn’t mean you’re not eligible for affordable income support. Since housing costs are so high in Sonoma, that a median income may not be enough to meet the 30 percent threshold for housing costs. So affordable housing units in the Moderate category may be open to families earning 100 percent of the AMI, or even more. Read full article here. 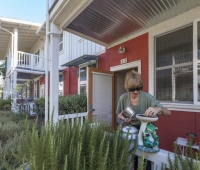