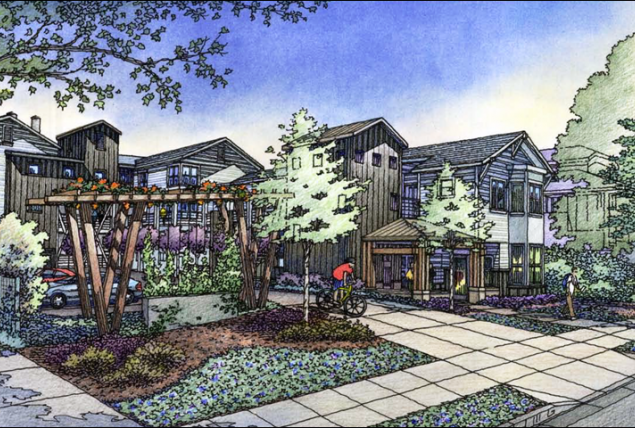 Satellite Housing, Housing Consortium of the East Bay (HCEB) and the Housing Authority of the City of Alameda are pleased to announce that Jack Capon Villa, a new affordable community that will be built at 2216 Lincoln Avenue in Alameda, CA, was awarded $5.7 million in funding from the California Tax Credit Allocation Committee. The highly competitive funding will allow the development to start construction in fall 2012 with an anticipated completion in 2013.

Located two blocks from the Park Street shopping district, Jack Capon Villa will provide permanent affordable housing for households in which at least one member has a developmental disability and total household income is at or below 50% Area Median Income (AMI). Due to Project-Based Section 8 vouchers provided by the Housing Authority of the City of Alameda, tenants will only pay 30% of their adjusted monthly income for rent. Named after Jack Capon, a long-time resident of Alameda who founded the Special Olympics Program in Alameda and served as the volunteer director from 1973 to 1999, Jack Capon Villa will provide 19 one- and two-bedroom apartments that will be adaptable for wheelchairs and accessible by an elevator. In addition, numerous green sustainable features, such as insulated low-e windows, non VOC paint and adhesives and recycled content carpet will be incorporated into the design to improve indoor air quality. Sustainable, bay-friendly landscaping will also be installed that is site-appropriate and minimizes the water required for irrigation.
In addition to the $5.7 million, Jack Capon Villa received $300,000 in Alameda County HOME funds, $180,000 from the Federal Home Loan Bank of San Francisco Affordable Housing Program through the Bank of Alameda, $1.4 million in redevelopment funds from the City of Alameda, and donated land from the Housing Authority of the city of Alameda. Groundbreaking is scheduled for late 2012.