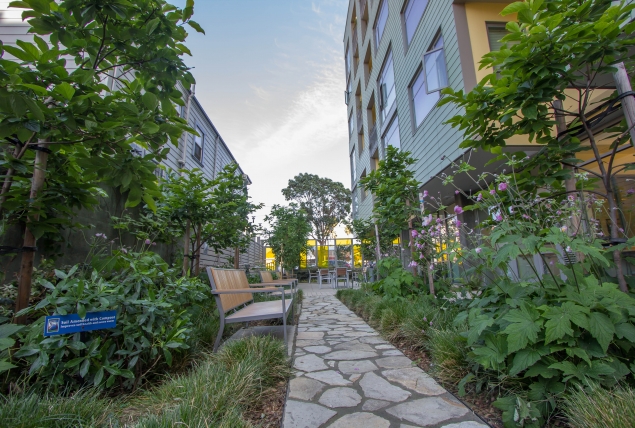 Article originally written by Jennifer Goodman and was featured in ecobuildingpulse.com.

Built on a former brownfield site, Merritt Crossing Senior Apartments provides critical affordable housing and on-site services to low-income seniors in downtown Oakland, Calif. The development transformed an abandoned site near a busy freeway into a community asset for disadvantaged or formerly homeless seniors while setting a high standard for sustainable and universal design. The 70 apartments are reserved for seniors with incomes between 30 and 50 percent of the area’s median income, and more than half of the units are set aside for those who are homeless or at risk of homelessness, living with HIV/AIDS, or challenged by mental illness.

The infill location is well served by public transit, including a BART station, which allowed planners to reduce on-site parking to one space per four apartments. The size of the garage was further minimized through the use of parking lifts that allow two cars to occupy one space, making room for an on-grade landscaped courtyard. Putting to rest the stereotypical notion of dark and dreary low-income housing, the design team from Leddy Maytum Stacy Architects specified tall windows that allow plentiful daylight deep into interiors and facilitate a connection to the outdoors and city views. A southwest-facing screen wall supporting vegetation from planters on each balcony provides shading, acoustical dampening, and visual privacy. Other heat-mitigating measures include a cool roof and high-performance glazing and thermal breaks on windows.

The building’s HVAC systems were designed to minimize energy use in order to control residents’ utility bills. Central high-efficiency water heating is augmented by a rooftop solar water heating system that provides more than 70 percent of the heating load. An array of rooftop photovoltaic panels provides 56,000 kilowatt-hours of electricity annually, offsetting 38 percent of the common area electrical usage. While the apartments do have operable windows, residents typically keep them shut due to freeway noise and air quality, so proper ventilation was key. Fresh air is brought in from a central rooftop air handler with a high-quality filter system. Continuous low-level exhaust is provided by rooftop fans connected to the bath ventilation system. 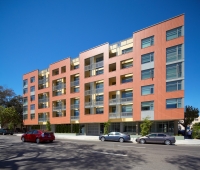 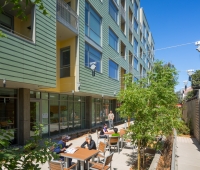