WALNUT CREEK -- New residents, affordable housing champions and the mayor shared an excited view of a different world Thursday at the grand opening of 48 affordable apartments designed around ideas of shared spaces and lives.

The sun broke through looming clouds to shine over a cheerfully green fake lawn in the center of a courtyard as about 80 people gathered to celebrate the opening of the Arboleda apartments on Third Avenue.

Beaming among them was Monika Ransom, an expectant mother who has been couch-surfing with relatives in Antioch since losing her job and a $1,100-a-month apartment she could not afford.

"Everything came crashing down in June, and now it's building up again," she said, smiling broadly. Her 7-year-old son has not seen his new home yet, but she envisioned how happy he will be with the play spaces.

She expects to move into her two-bedroom Arboleda residence next week and knows she'll be able to afford her yet-to-be-determined rent. And she expects her new situation to give her room to pursue the nursing degree she's always hoped for.

Good materials were everywhere to be seen in the complex of one- and two-bedroom apartments with windows overlooking the common spaces and others with views of Mount Diablo. The highly energy-efficient project has solar and thermal energy generators on its roofs.

The units are convertible for disabled people who will be distributed among the tenants, so "no one will be segregated," said Susan Friedland, executive director of the project building and owner, the nonprofit Satellite Affordable Housing Associates.

Praise was liberally spread around for the hundreds of people who helped the project along, starting with Walnut Creek Mayor Bob Simmons, "the leader with the vision to recognize the importance of affordable housing," Friedland said.

Simmons deferred to others who had come before him. The city contributed the land for the project and loaned $4.1 million to the housing group for the $26 million complex. The properties had held three deteriorating apartment buildings and a house.

"We worked closely with the neighbors on this," he said. Generally, when affordable housing opens up, "a lot of their fears are not realized."

He praised Walnut Creek for sticking with the idea and not being swayed by such fears during the project's public hearings. The city "stood up, it showed backbone," he said.

Such projects have a purpose, said Williams, who is a board member of another nonprofit housing group, East Bay Housing Organizations. "The real goal is for this to be a platform for moving up."

The larger purpose was summarized by Jonathan Astmann, the Satellite Housing project manager. He cited a Greek proverb: "A society grows great when old men plant a grove of trees whose shade they know they shall never sit in." 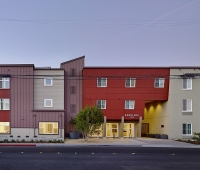 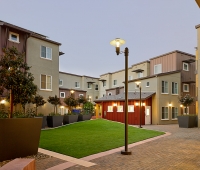