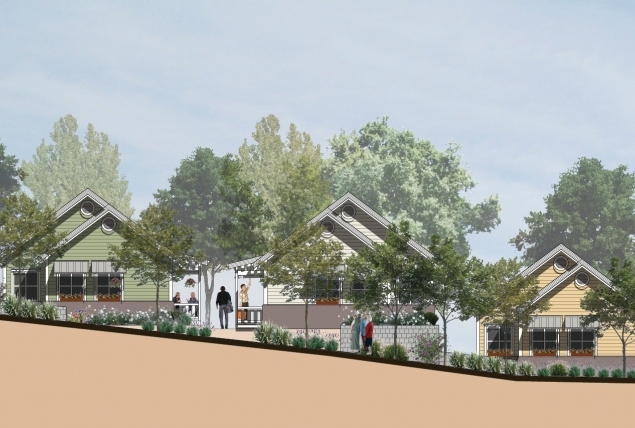 With nearly $3 million more in financing secured from the state of California, a housing project that promises to provide affordable housing for seniors—and now veterans—is moving closer to becoming a reality in American Canyon.

Valley View Senior Homes is one of 17 projects in California that will receive funding through Proposition 41 and the Veterans Housing and Homeless Prevention Program, state officials announced on June 30.

The American Canyon project, located on the west side of town off Theresa Avenue, secured $2.8 million in loans for a housing opportunity for lower income residents that’s different from what the city has now.

But Valley View will consist of 70 cottages, all for rent, while offering amenities to promote a sense of community for its 55-years-and-older residents.

“This is an unusual project for American Canyon, a place of single-family homes,” said Brent Cooper, the city’s community development director. “The goal here is a site designed to foster interaction between the residents.”

The developer, Satellite Affordable Housing Associates (SAHA) of Berkeley, intends to make all the cottages affordable.

“Our intention is to have all 70 units available to households with incomes at 60 percent or less than the area median income,” said Aubra Levine, SAHA’s associate director of housing development.

The median family income for Napa County is currently $84,160, according to Levine.

“Our apartments will be targeted to households making approximately $50k or less,” she added.

In addition to its affordability, Valley View will feature bocce courts, a fruit tree orchard, multiple gazebos and more, including a 3,300-square-foot clubhouse with computer stations, a crafts room, lounge and other facilities.

SAHA will also reserve 22 of the units for households with veterans who are 55 and older. This carve out was a precondition for receiving the $2.8 million in financing from the state.

Levine said she was “very excited” when SAHA got the news about the money.

“It fills a critical gap as a funding source,” said Levine, and “will enable us to attract additional capital for the project.”

The developer needs to raise $20 million to build Valley View, and has more than $13 million in funding secured, according to Cooper.

To help SAHA get closer to its funding goal, the City Council on Tuesday endorsed a $5.6 million request that the developer will make to the HOME Investment Partnership Program, which is run by the U.S. Department of Housing and Urban Development.

Levine said if everything goes as they hope with their financing, they will start construction on the cottages next summer.

Anyone driving by the future home of Valley View, located at 31 Theresa Ave., might notice several terraced foundations on the site.

These features are the remnants of the previous housing project that was slated for the location in the last decade.

Known as Valley Vista, the project was originally going to consist of 35 affordable single-family homes.

But that project, like so many other construction efforts, got derailed by the Great Recession. The developer eventually went belly up, leaving the city with some poured concrete and little else.

The City Council purchased the land from the bank after the property went into foreclosure, and Cooper went looking for a new developer to expand affordable housing in American Canyon.

After receiving 29 proposals from for-profit and nonprofit sources, the city in 2012 chose SAHA, which specializes in affordable housing developments in the Bay Area.

SAHA impressed Cooper with an affordable housing project in Sonoma, where it managed to make modest-sized homes feel larger and airier than they actually are.

It also “distinguished itself from the others” bidding on Valley View by offering a vision that created “a sense of community” and could make the place “feel like home.”