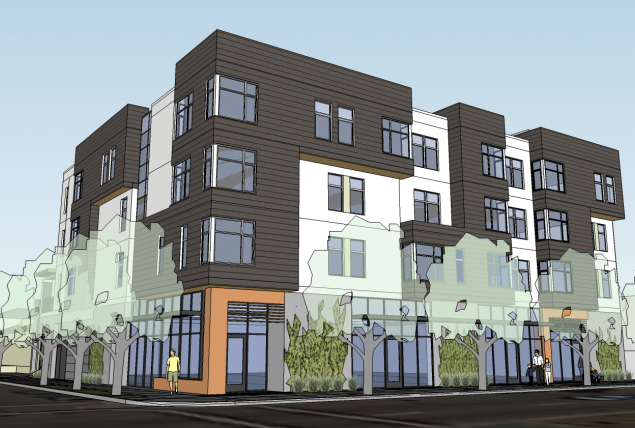 A vacant lot in West Berkeley is slated to become an affordable housing complex aimed mostly at people with disabilities after a unanimous vote by the city zoning board last week.

Satellite Affordable Housing Associates (SAHA), a Berkeley-based non-profit housing developer, sought permission from the board July 10 to modify a use permit originally granted to a different property owner in 2007.

SAHA representative Jonathan Astmann told the Zoning Adjustments Board that the project at 2748 San Pablo Ave. (at Grayson Street) would provide 17 rentals for people with disabilities, including three for families with a member who has HIV/AIDS. The project had been approved previously as condominiums.

The four-story project would have 23 units, unchanged in number from the earlier permit, but requested a reduction in parking spaces — from 27 to 13 — to fit the needs of residents. Astmann said SAHA property residents tend to own fewer vehicles.

According to the staff report, the unit mix has shifted slightly and, overall, the apartments are smaller, with the average size dropping from 1,004 square feet to 908. All the units have either one or two bedrooms. A community room, laundry room, outdoor patio, computer annex and library will be available to tenants.

The parking garage, along with a residential lobby and about 2,100 square feet of commercial space, would be located on the ground floor. According to a SAHA project description, a pilates and wellness center will open in the commercial area.

All units in the building would be available for at least 55 years to “very low income” households earning no more than 50% of area median income, according to the staff report.

Astmann said SAHA has secured four funding sources for the project. The city of Berkeley is one of them. According to the SAHA website, the project will cost $10 million to build.

The city has been working to boost its Housing Trust Fund to pay for more affordable housing in Berkeley, and SAHA’s Grayson Street Apartments is one of six projects approved so far to receive some of that money.

According to a February report to the Berkeley City Council, council approved the allocation of $1.095 million to SAHA for the project in December 2012, and SAHA was set to purchase the property by May of the following year. Other funding for the project was listed as Section 8, tax credits and grants.

Commissioner Sophie Hahn asked whether it might be possible for Astmann to seek more funding and a density bonus to build even more affordable housing on the property.

“It’s a pretty intense land use as it is,” he said, noting that the density on site works out to about 100 units per acre. “It’s a nice size for the scale of San Pablo Avenue.”

Two residents addressed the board to say how difficult parking in the neighborhood has become. One of those speakers said, too, that she had spoken with many businesses nearby that had not received notification about the modification plans.

City staff said all occupants within 300 feet of the project should have been notified, and that proper notifications were believed to have been made.

Zoning board members said they were sympathetic to the parking concerns, but said little else about the project before approving it unanimously.

“I think it’s a wonderful project,” said Commissioner Bob Allen. “I’m usually the one speaking for not enough parking, but I’m convinced the amount they’ve requested is really appropriate.”

Astmann told the board SAHA hopes to break ground in 2015.