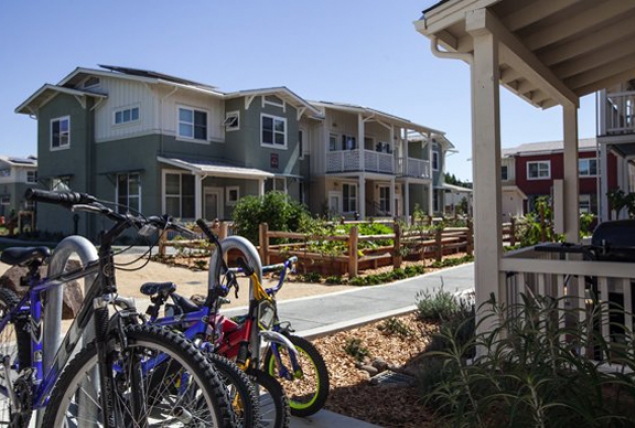 Do a quick Craigslist search of Sonoma Valley rental properties, and you’ll find one-bedrooms ranging from $950 to $2,000; while three-bedroom rentals can fetch as much as $6,000 a month. It’s no surprise that the affordable housing complex Valley Oak Homes, which brought one-bedroom apartments as low as $450 and three-bedrooms for $1,064, saw a lot of interest from Valley residents.

“We had between 450 and 500 applicants,” said Eve Stewart, director of housing development for Satellite Affordable Housing Associates (SAHA), which built the 43-unit complex at 19344 Sonoma Highway.

SAHA (previously called Affordable Housing Associates) seeks to serve extremely low-income and low-income residents, defined as those living at or below 50 percent of the area median household income. In 2013, the U.S. Department of Urban Development set Sonoma County’s median household income at $74,900. After determining an applicant’s eligibility based on income, SAHA next considered credit scores and rental history.

“We really don’t want to put up barriers for people who may have had financial problems … But we do want a safe and responsible community,” Stewart said. The hundreds of applicants who fit Valley Oak’s rental criteria were assigned a random number and placed into a lottery for one of the 43 sustainably-designed rental units.

“Rental prices here are insane. We definitely had a lot of interest from our residents,” Leeb said. Unfortunately, none of her clients won the coveted lottery for a spot at the newly built complex. Stewart said qualified applicants that didn’t get an apartment are automatically placed on a waiting list and will be contacted if and when a new apartment opens up. Current Valley Oak residents, who moved in beginning in May, all have leases signed for one year.

“As long as you’re in good standing, you can stay as long as you like,” Stewart said, adding that the final two tenants are moving in this month.

The construction plan was sensitive to the environment, with permeable asphalt that keeps rainwater out of storm drains and instead allows it to slowly seep back into the aqueducts; a grey-water system for irrigation; bicycle parking; a community garden and solar energy.

“Sustainability is really important to us,” Stewart said of SAHA. “We believe it really enhances the health of our residents. We also seek to lesson our overall footprint.”

As landlords in addition to developers, SAHA seeks to build community at Valley Oak Homes. A clubhouse offers a computer lab and large community kitchen, while staff is available to offer resources on anything from job skills to heath care.

The $17.5-million project would have never been possible, she said, without support from the City of Sonoma’s now defunct redevelopment agency, which purchased the land and brought SAHA in to build and manage the property. The Berkley-based affordable housing company has built dozens of similar complexes around the Bay Area, but ever since Gov. Jerry Brown shut down the state’s redevelopment agencies, further growth has slowed because those funds are no longer available to construct additional affordable housing. Stewart noted, “Kind of on all levels, we don’t know what’s going to happen” with the future of affordable housing.

SAHA is throwing its support behind SB 391, the California Homes and Jobs Act introduced by Sen. Mark DeSaulnier, D-Concord, this year, which was approved by the state Senate with a vote of 27 to 12 and is now making its way through the Assembly. The bill would create consistent and dedicated state funding for affordable housing by establishing a $75 fee “to be paid at the time of the recording of every real estate instrument, paper or notice required or permitted by law to be recorded,” including deeds, requests for notices of default, notice of trustee sales and more.

“That would raise about half of what we had statewide under (the redevelopment agencies),” Stewart said. Statewide, redevelopment agencies raised $1 billion a year for affordable housing, while the California Homes and Jobs Act is expected to raise $500 million and create 29,000 jobs a year.

“There’s a huge need for more affordable housing, both in Sonoma and across the Bay Area,” Stewart said. “We’re closely following SB 391.”