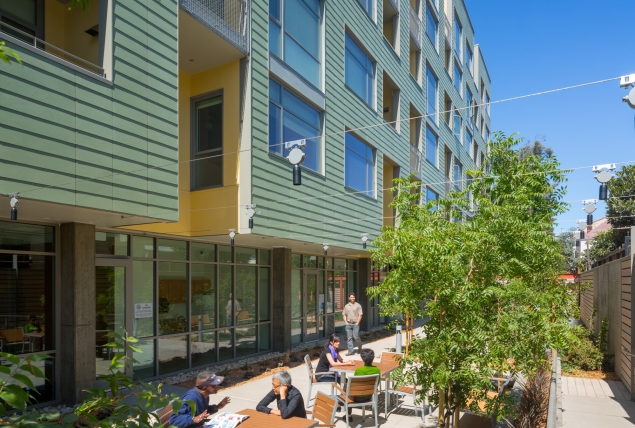 Low-income and formerly homeless seniors in Oakland, Calif., have a new place to call home.

Merritt Crossing, which sits at the edge of Oakland’s Chinatown, has transformed an abandoned brownfield site near a busy freeway into LEED-Platinum housing for seniors 55 and older.

The 70-unit development is reaching a diverse group of seniors. Half of the units are set aside for seniors who were homeless or at risk of homelessness, three are for residents living with HIV/AIDS, and three are for residents with mental illness. The project is also home to 15 veterans. Fifty of the units received project-based Sec. 8 vouchers that will ensure that residents don’t pay more than 30 percent of their income on rent.

The project, which opened in July 2012, has had zero turnover in its first year, and the residents have created a sense of community by organizing potlucks, cooking demos, and tai chi classes.

Because the development is so close to the freeway, noise mitigation and air quality were top priorities. A greenscreen—a series of vines that will grow up a trellis—has been constructed on the side of the building that faces the freeway to help mitigate the noise. The project is also smoke free.

Union Bank provided the $28.3 million project with low-income housing tax credit equity, a permanent loan, and a Federal Home Loan Bank of San Francisco loan. Additional financing was provided by the Oakland Redevelopment Agency, the city of Oakland, Alameda County, and the California Department of Housing and Community Development.