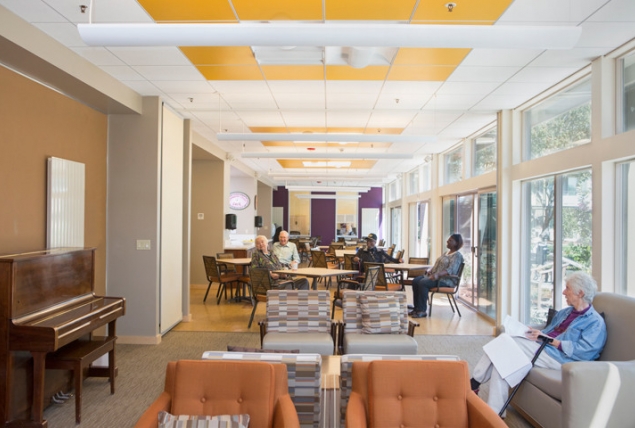 After 16 months of construction, a Berkeley lodge that houses more than 150 low-income seniors will celebrate the finish of its remodeling next week. The complex remodeling process was overseen by Satellite Affordable Housing Associates, or SAHA, a nonprofit organization that develops and manages affordable housing for low-income Bay Area residents. The Strawberry Creek Lodge Foundation, the nonprofit organization that helped fund the building of the original Strawberry Creek Lodge in 1962, also helped guide the remodeling. Strawberry Creek Lodge includes 120 studio apartments and 30 one-bedroom apartments. Residents have access to common areas, including recreation rooms, a movie theater, a library, a computer lab, an art room, a dining area, bike storage and a lounge.

To cover increases in the cost of living, the Satellite Affordable Housing Associates will increase tenants’ rent by about 2 percent. Forty-one studios and 12 one-bedroom apartments are federally subsidized under Section 8 of the Housing and Community Development Act, meaning that the tenant pays about 30 percent of his or her income toward rent, while the balance is covered by the federal government through the Sonoma County Housing Authority. According to a press release, SAHA managed a development team that included BBI Construction and Anne Phillips Architecture to complete the renovation and improve the lodge’s safety, accessibility and eco-friendliness.

Additionally, the team retrofitted the buildings to prepare for earthquakes, updated the security system and added emergency and exterior lighting systems. To comply with Americans with Disabilities Act standards, the team also redesigned eight units and widened pathways. A solar photovoltaic roof was added, providing 40 percent of the building’s energy needs, on top of a solar hot-water system intended to reduce gas usage by 50 percent, environmentally friendly flooring and native drought-tolerant landscaping, according to a SAHA press release. While many of the building’s residents remained in their homes during construction periods, Jerome Essel — who has been a Strawberry Creek Lodge tenant for the past nine years and served as the Tenants’ Association president during negotiations with the remodeling team — said he and other tenants found it difficult to live with the construction.

“We have our own way of doing things, and we didn’t always fit with their model, and we still don’t,” Essel said. “So we still have things coming up, but they’re trying to work with us.”

Navon Franks, who has been a Strawberry Creek Lodge tenant for the past 18 years, disagreed. Franks said he did not mind living in the lodge during renovation.

“I thought it was lovely and they did a great job, and the noise didn’t bother me,” Franks said. “They did a bunch of improvements to make the place better.”

Given concerns among the residents, SAHA Executive Director Susan Friedland said the association appreciated the tenants’ overall patience during the construction, adding that she believes all the lodge’s residents are much happier with the renovated building.

“The building is modern and beautiful and really useable,” Friedland said.

The remodeling was funded by the Berkeley’s Housing Trust Fund, the California Tax Credit Allocation Committee, the Bank of the West, the U.S. Department of Housing and Urban Renewal and the Strawberry Creek Lodge Foundation.