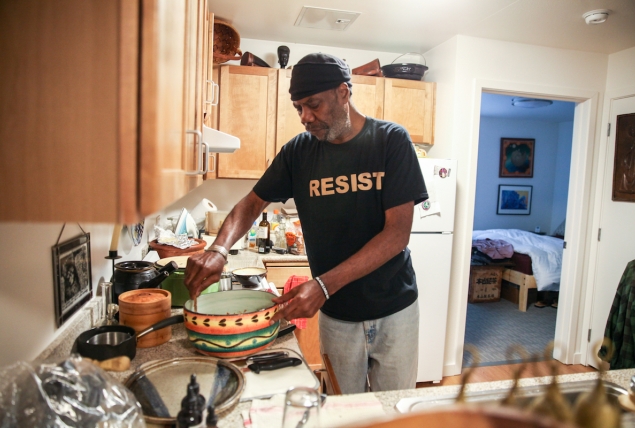 Berkeley low-income seniors get a fresh start at Harper Crossing

In early September, Berkeley resident Benton Brown moved into the newly built, 42-unit Harper Crossing affordable housing development located just southwest of the Ashby BART station in South Berkeley. “All I wanted was to buy a house and have a nice spot,” said the 71-year-old retired horticulturalist.

For middle and low-income residents like Brown, buying and renting homes in Berkeley has become increasingly difficult. Berkeley has a recognized dearth of affordable housingand a lack of money to build more. According to a 2017 report from the National Low Income Housing Coalition, Alameda County is now among the five most expensive metropolitan counties in the nation to rent. And a May 2017 report finds that Alameda’s lowest income earners spend 56% of their income on rent.

Brown now lives alongside 44 other low-income seniors, some of whom are schoolteachers, artists, musicians, and retirees. Many had been priced out of the Berkeley housing market. Six residents were formerly homeless. The oldest Harper Crossing resident is 92.

One of the project’s core goals is to help seniors stay in their homes as they age. “We have many residents in their mid- and late-90s, even a couple of residents over 100, who have been able to maintain independence in their housing,” said Susan Friedland, Executive Director of SAHA.

The housing development had been several years in the making. In 2012, the City of Berkeley selected Satellite Affordable Housing Associates (SAHA) to carry out the project. SAHA creates affordable housing opportunities for low wageworkers and seniors on fixed income, with rents at less than half median monthly rent levels.

Financed with more than $18 million from eight different sources, the project broke ground in February 2016. In November of that year, SAHA opened up the waitlist for applications for two weeks and received just fewer than 700 applications.

A lottery determined the ordering of the top 400 applicants. SAHA then gave preference to those who lived or worked in Berkeley.

Maximum qualifying incomes for a one-person household range from $21,930 to $43,860. Maximum rents at Harper Crossing range from $587 to $1,174, depending on the income restriction for each unit.

The development incorporates social services and programming, easy access to transportation and universal design features to help make it accessible, and to enable elderly Berkeley residents to have a high quality of life into their later years.

Jaime Ayala, Harper Crossing’s assistant property manager, said that computer instruction has helped some residents begin using social media, which allows them to connect more frequently with their extended families and grandchildren. For others, it’s opened up new recipes and cooking experiences.

The development is also designed to be aesthetically appealing. Each apartment is between 500 and 600 square feet and has an open floor layout, with hardwood floors, granite countertops, and large glass windows. Some of the apartments have dramatic views of San Francisco and Oakland. The building’s most prominent design feature is its courtyard.

Brown, the resident, worked at Berkeley Horticulture for 14 years and likes being around plants. The courtyard is a great place to meditate, he said.

“We want to make our residents feel inspired by the place where they live,” Friedland said. Katie Fisher, SAHA’s project manager, points to research showing that the higher the aesthetic quality of the building, the longer people live.

Althea Rankins, a gospel musician, appreciates the open hallway design of Harper Crossing where she has her new home. Photo: Kelly Sullivan

Althea Rankins, a gospel musician, was able to move back to Berkeley from Hayward after having her application accepted at Harper Crossing. “SAHA really did a good job — they built stuff to help the seniors for their everyday living.”

For someone who formerly lived in a hardscrabble building marked by gang activity, she appreciates the transparency of the open hallway design of the building, which opens onto the courtyard. “When everybody opens their front door, you can see each other, so you can almost monitor who’s coming in and out.” She also enjoys the fresh air the courtyard allows.

For Brown, something as simple as the paint on the walls of his apartment has made a big difference in his quality of life. “The walls they are all painted white, and I can see all of my art work jumping out at me. I’m feeling great.”

But, of all the different aspects of living at Harper Crossing, Brown most enjoys the other residents. On a recent weekend, he and two others gathered in the common area to cook sausages, drink cider, and watch a football game.

The location of the building — within blocks of BART as well as an AC Transit bus stop — makes it easy for residents to use public transportation. Residents also benefit from an arrangement with Alameda-Contra Costa Transit District that allows SAHA to buy discounted transit passes, which they then distribute to residents for free.

Residents place a high value on that easy mobility. Brown enjoys taking the bus to the Saturday farmer’s market or to Berkeley Bowl, where he can buy the dandelion greens and organic produce he uses in his morning smoothies. “When I want to go back to North Berkeley it’s just a skip and a hop back into the food ghetto to see my old friends.”

Residents acknowledge the significant support they receive from Harper Crossing’s social service coordinator, manager and maintenance staff. “When there’s a problem, like a maintenance problem, they come out and fix it, they’re very sharp, efficient, they don’t lag around with it,” Rankins said.

Berkeley would like to construct more affordable housing like Harper Crossing, but in the short term has committed itself to channeling all the new monies generated by Measure U1, which was passed in 2016, to homeless housing. The measure taxes larger for-profit residential property owners and is estimated to open up $4 to $5 million of new funding a year for future affordable housing projects. The City Council is on record stating that it intends to funnel those monies into constructing an 89-unit complex ob Berkeley Way in the downtown. That project, like Harper’s Crossing, would have social services on site.

Friedland is hopeful that future funds will build more affordable housing for other populations.

“Our whole goal is: How do we serve people at the lowest incomes to pay the lowest amount of rent who have been completely left out of this market?” Friedland said. “We hope to show that there are solutions to the housing crisis.”