Senior residents and community members of Berkeley celebrated the grand opening of a new low-income senior housing complex in the city Tuesday morning.

Harper Crossing is a permanent affordable housing project in South Berkeley spearheaded by Satellite Affordable Housing Associates, or SAHA. In collaboration with public and private funding, the complex offers 42 new affordable one-bedroom units for low-income seniors, of which more than 65 percent are longtime Berkeley residents, according to a SAHA press release.

About 700 seniors applied for an apartment in the housing project and 400 were placed on the lottery to be interviewed, said SAHA assistant property manager Jaime Ayala. Ultimately, about 100 were interviewed and their incomes verified before SAHA accepted a total of 42 residents. All units are now either reserved or occupied.

An hourlong program at the grand opening included speeches from residents and various community members involved with the project. Berkeley Mayor Jesse Arreguín emphasized during the event his long-standing commitment to increasing affordable housing in Berkeley.

According to Arreguín, as the housing market has grown, rent in Berkeley has spiked. Seniors who lose housing are “ending up on the streets,” Arreguín said in his address.

“We’ll make sure our seniors age in place in our community,” Arreguín said at the event.

The complex, which has been in the making since 1996, is located across the street from the Ashby BART station. It was designed to be energy-efficient, and it is accessible to seniors 62 and older with household incomes that are 30 to 60 percent of the area’s median income or lower, according to a pamphlet distributed at the opening.

The complex was originally set to open in summer 2017, but the process was delayed four to five months because of ongoing rain. The move-in process for residents was postponed to Sept. 1, according to Nicole Anticy, who works in SAHA’s accounting department.

SAHA’s executive director Susan Friedland said affordable housing in the area is “such a crisis,” but she added that she believes it can be solved.

“If there’s a vision, opportunity and persistence, it’s possible,” Friedland said during the event.

Before the ceremony, community members chatted, listened to music, ate and roamed the four-story housing complex. An apartment walk-through was available on the third floor, and one resident on the first floor opened up his apartment for people to see.

“There’s a lot of love for seniors and disabled people,” Rankins said of the complex. “You gotta have a lot of love.” Talia Stender, chief of staff to City Councilmember Ben Bartlett, who ran for council on platforms related to solving the city’s housing crisis, spoke during the opening. She said Bartlett will continue to advocate for affordable housing in Berkeley.

“These are the people who built Berkeley,” Stender said of senior Berkeley residents. “We owe them everything.” 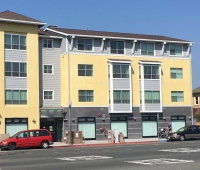