The Pacific Avenue Affordable Housing Project, as it is called, is proposed for 3.6 acres of vacant city-owned land on the south side of Pacific Avenue at the end of the cul-de-sac between Sunken Gardens Skate Park, Tri-Valley Haven and a solar panel field — nearby city hall, the library and the police station.

Satellite Affordable Housing Associates and Interfaith Housing plan to develop and run the units, located near Vineyard Village, another of their properties for seniors.

According to the proposal, which eventually must be approved by the city council, the project will include preferences for Livermore residents over age 62, as well as veterans and seniors experiencing homelessness.

The 100% affordable senior project is designed for households earning 60% of the area median income, which in 2021 was less than $60,000 for one person. Apartments will range from 575-square-feet for a one-bedroom and 750-square-feet for a two-bedroom unit.

James Conlon, project manager for Satellite Affordable Housing Associates, said the plan was in the works since 2018 and its initial approval would allow the company to seek funding “to make it a reality.”

“I’m definitely in support of this project,” Branning said. “I think it's wonderful.”

During a discussion, planning commissioners suggested building trails to allow residents to easily walk to the library; they suggested the planting of evergreen trees along with the deciduous trees proposed in the project application.

The project was originally included as part of the 33 acres that belonged to the Livermore Stockmen's Rodeo Association. The city purchased the property in 1962 to build a civic center campus, parks and other recreation facilities. As part of the purchase, the city planned to dedicate a park to house a permanent memorial for residents of Murray and Pleasanton Townships who served in the U.S. armed forces. Although the city built the civic center, the park never materialized.

In 2018, the city council amended the agreement to use the land for affordable housing for seniors and veterans and provided land in the downtown core for Stockmen’s Park. Stockmen’s Park houses the memorial.

“Laning, you have probably housed thousands of people,” Anderson said. “I just want to say ‘thank you’ from the bottom of my heart for doing this for all those people and for our community.” 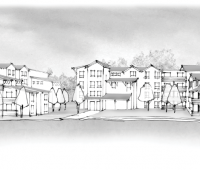